MEXICO CITY: 14 Nov. 2018 — Vehicle owners in Mexico rate problems with their vehicles on a severity scale of 1 to 5, with 5 being the most severe. Among eight of the 10 most severe vehicle problems, owners visit a dealership less than 75% of the time to have these issues resolved, according to the J.D. Power 2018 Mexico Vehicle Dependability StudySM (VDS). The problems with the highest severity tend to be issues that are dangerous, costly to repair or perceived as vital to the vehicle’s function.

“The models we examine in the Vehicle Dependability Study are covered under warranty, but owners are still hesitant to take their vehicles to a dealership even to fix problems as simple as learning how to operate their Bluetooth system or fix paint imperfections,” said Gerardo Gomez, Senior Director and Country Manager at J.D. Power de Mexico. “Dealers need to examine why this is and improve their best practices because, in some cases, they may be able to resolve the issue and create a more positive ownership experience for customers. The longer someone drives a vehicle that has an actual or perceived quality issue, the less likely that owner is to purchase that model again.”

The study, now in its fourth year, measures problems experienced during the past 12 months by original owners of vehicles in Mexico after 12-36 months of ownership. The study examines 177 problems across eight categories: engine and transmission; vehicle exterior; driving experience; features/controls/displays; audio/communication/entertainment/navigation (ACEN); seats; heating, ventilation and cooling (HVAC); and vehicle interior. Overall dependability is determined by the number of problems experienced per 100 vehicles (PP100), with a lower score reflecting higher quality.

Another metric for dealers to consider is the Net Promoter Score® (NPS),[1] new to the study, which measures customers’ likelihood to recommend both their vehicle make and model on a 0-10 scale. Customers are segmented into three groups: detractor (0-6), passive (7-8) or promoter (9-10). NPS is calculated by subtracting the percentage of detractors from the percentage of promoters.

Following are key findings of the 2018 study:

“Half of the most severe problems are in the engine/transmission category, including excessive fuel consumption, engine overheating, abnormal transmission noises, fluid leaks and abnormal engine noises,” Gomez said. “While some problems need to be addressed during vehicle production, dealers should reach out to customers and encourage them to come in for service when needed because some problems are a quick fix and can help create return buyers.”

MINI ranks highest in vehicle dependability among luxury brands and performs highest overall, with a score of 64 PP100. GMC ranks second with 76 PP100 and Mercedes-Benz ranks third with 84 PP100.

Mercedes-Benz ranks highest in APEAL among luxury brands, with a score of 916. Mazda ranks highest among mass market brands (888).

The 2018 Mexico Vehicle Dependability Study (VDS) is based on the evaluations of 9,215 interviews with owners in Mexico who purchased their vehicle from February 2015 through February 2017. The study was fielded from April through August 2018.

J.D. Power is a global leader in consumer insights, advisory services and data and analytics. These capabilities enable J.D. Power to help its clients drive customer satisfaction, growth and profitability. Established in 1968, J.D. Power is headquartered in Costa Mesa, Calif., and has offices serving North/South America, Asia Pacific and Europe. J.D. Power is a portfolio company of XIO Group, a global alternative investments and private equity firm headquartered in London, and is led by its four founders: Athene Li, Joseph Pacini, Murphy Qiao and Carsten Geyer. 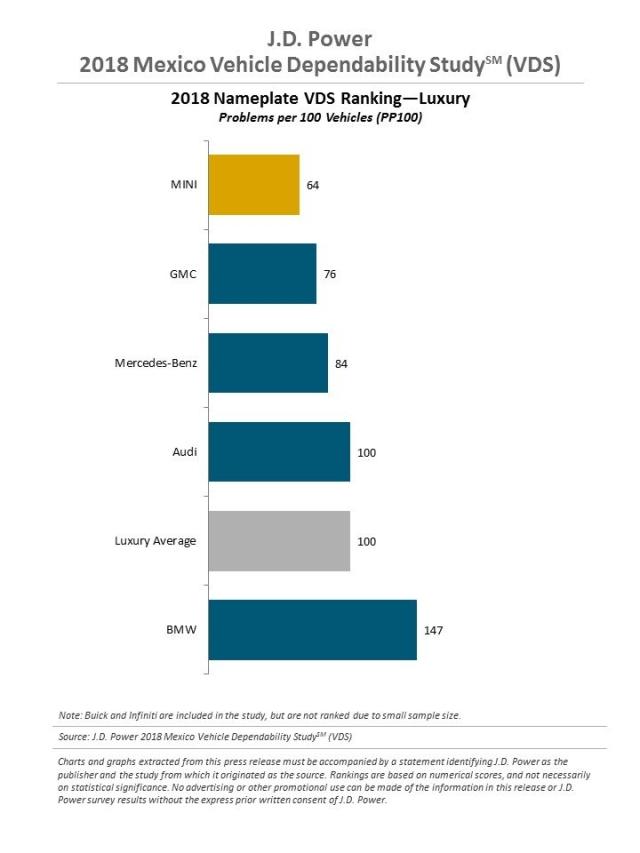 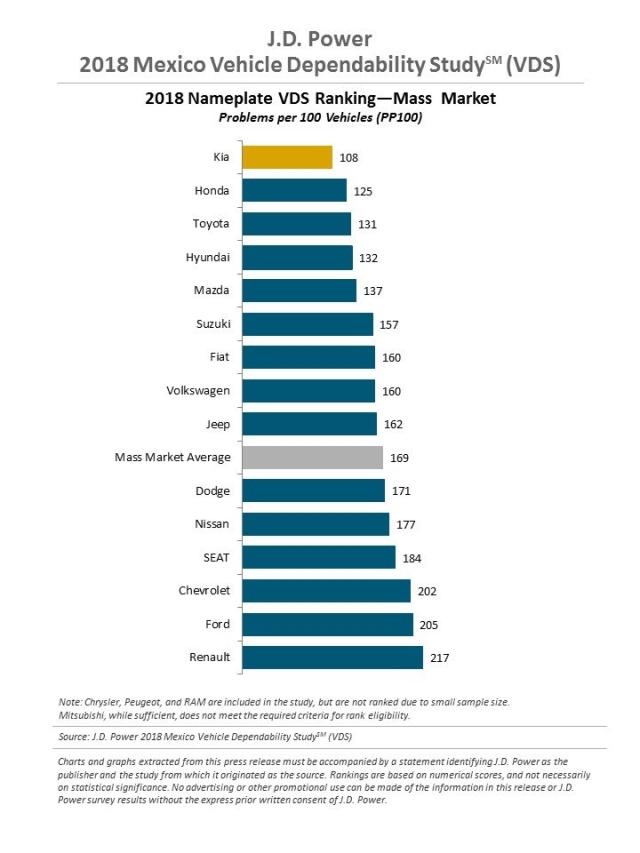 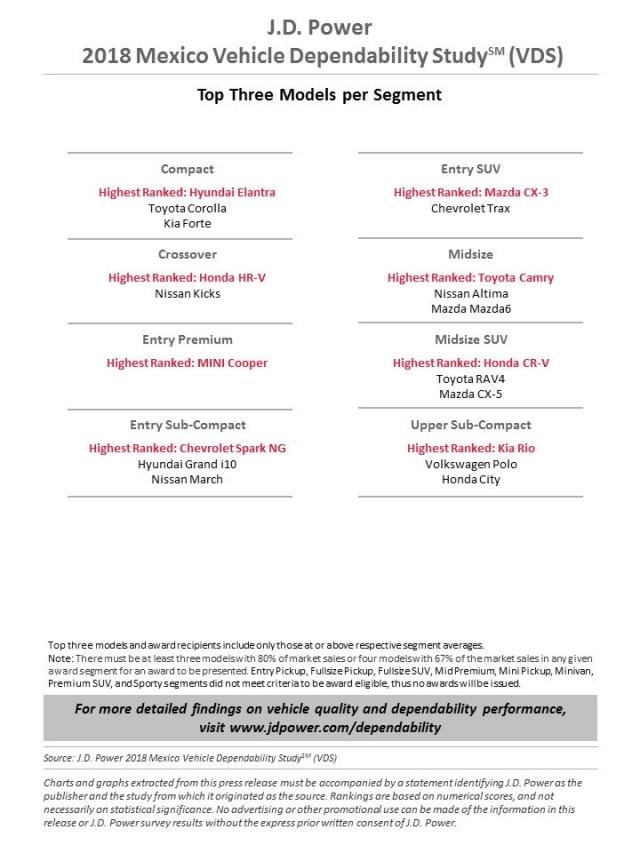 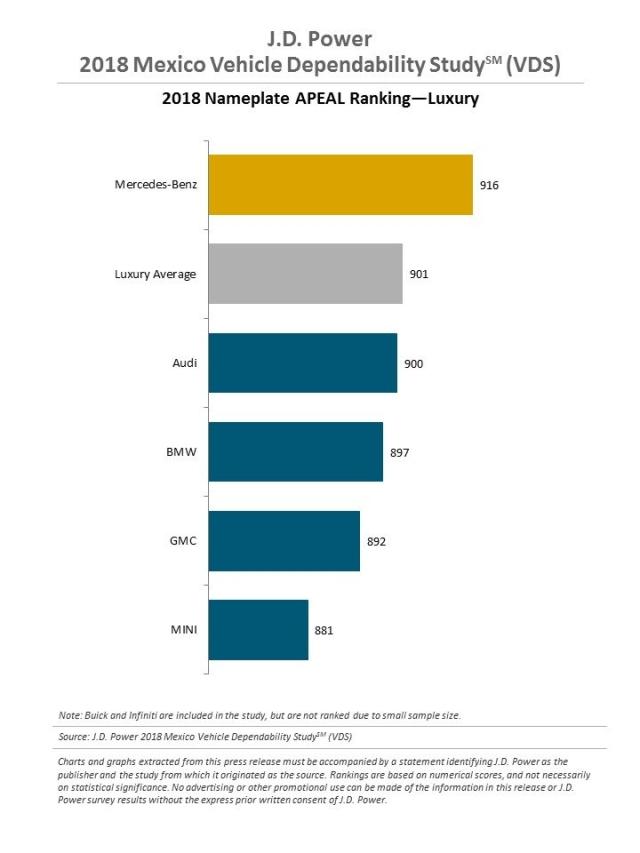 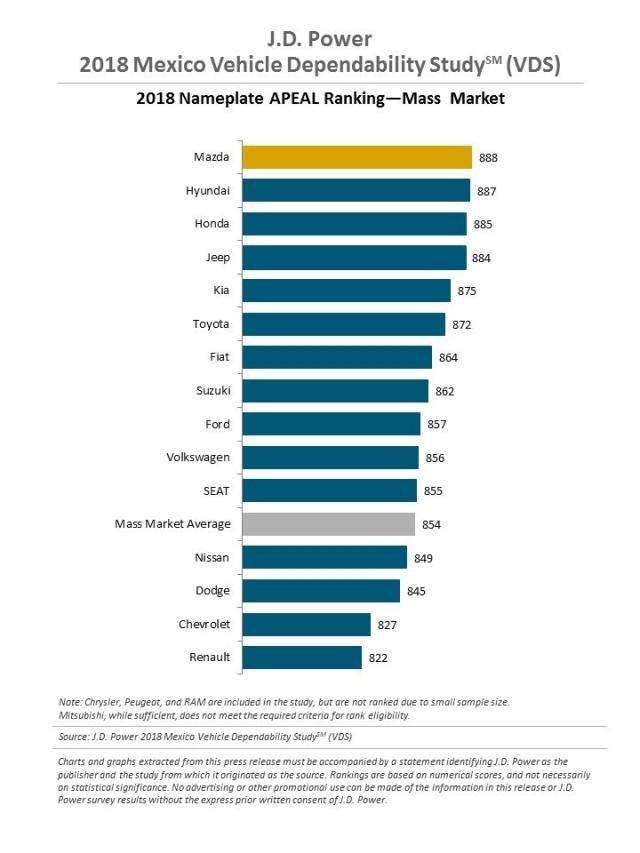