MEXICO CITY: 9 April 2019  Rising fuel costs are changing the purchase behavior of new-vehicle buyers in Mexico, especially among Gen Y[1] customers, according to the J.D. Power 2018 Mexico Sales Satisfaction Index (SSI) Study,SM released today. Among Gen Y customers, fuel efficiency is the second-most important reason for purchasing a specific make and model, preceded by attractive styling. Among all generations of new-vehicle buyers, fuel efficiency is the No. 1 most influential purchase reason this year, moving up from No. 4 last year.

“While older customers put more emphasis on their previous experience with a brand when choosing a vehicle to purchase, younger customers don’t have as much prior experience to rely on, so they focus on other aspects of the vehicle,” said Gerardo Gomez, Senior Director and Country Manager at J.D. Power de Mexico. “Dealers looking to attract a younger segment of buyers need to emphasize such vehicle characteristics as fuel efficiency and styling when dealing with them. Much like in the United States, consumer preferences have shifted away from cars and toward SUVs, but the increased cost of fuel may slow the demand of SUVs and other large vehicles.”

A new metric, Net Promoter Score® (NPS),[2] which measures customer loyalty and predicts business growth, is included in the 2018 Mexico SSI Study to further show the role sales satisfaction plays in whether a customer will recommend a brand or tell others to avoid it. The study survey asks customers about their likelihood to recommend both their vehicle make and model on a 0-10 scale. Based on their responses, customers are grouped into either the detractor (0-6), passive (7-8) or promoter (9-10) group. Satisfaction among customers who are promoters of their vehicle model is 172 points higher (on a 1,000-point scale) than among those who are detractors, which demonstrates that, to create brand promoters, dealers must provide an excellent sales experience.

The study, now in its fifth year, is a comprehensive analysis of the new-vehicle purchase and delivery experience, and examines customer satisfaction with the selling dealer across five measures (listed in order of importance): vehicle delivery (26%); working out the deal (24%); salesperson (19%); dealership facility (18%); and test drive (14%). Overall satisfaction is calculated on a 1,000-point scale.

The 2018 Mexico Sales Satisfaction Index Study is based on the evaluations of 3,303 new-vehicle owners in Mexico after one to 12 months of ownership. The study was fielded from September 2017 through March 2018.

J.D. Power is a global leader in consumer insights, advisory services and data and analytics. These capabilities enable J.D. Power to help its clients drive customer satisfaction, growth and profitability. Established in 1968, J.D. Power is headquartered in Costa Mesa, Calif., and has offices serving North/South America, Asia Pacific and Europe. J.D. Power is a portfolio company of XIO Group, a global alternative investments and private equity firm headquartered in London, and is led by its four founders: Athene Li, Joseph Pacini, Murphy Qiao and Carsten Geyer. 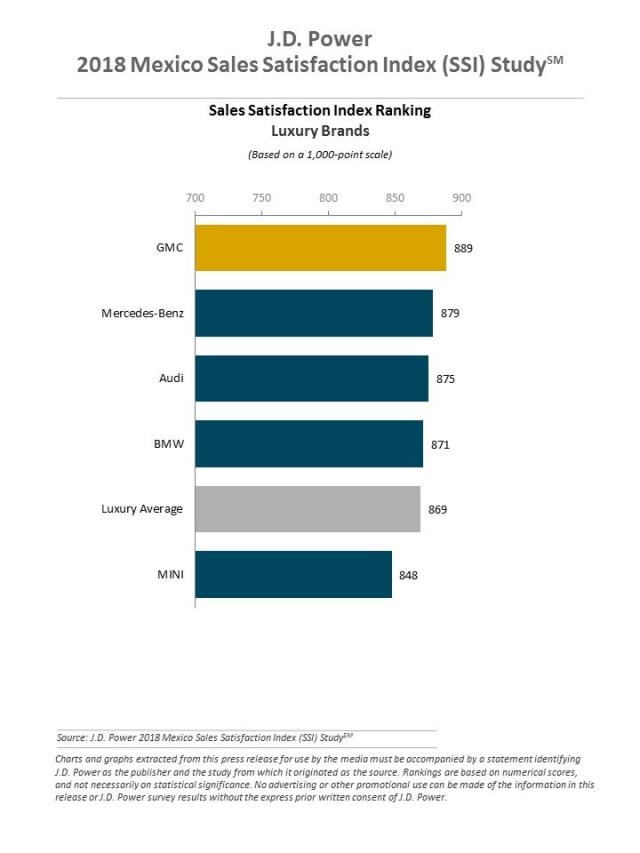 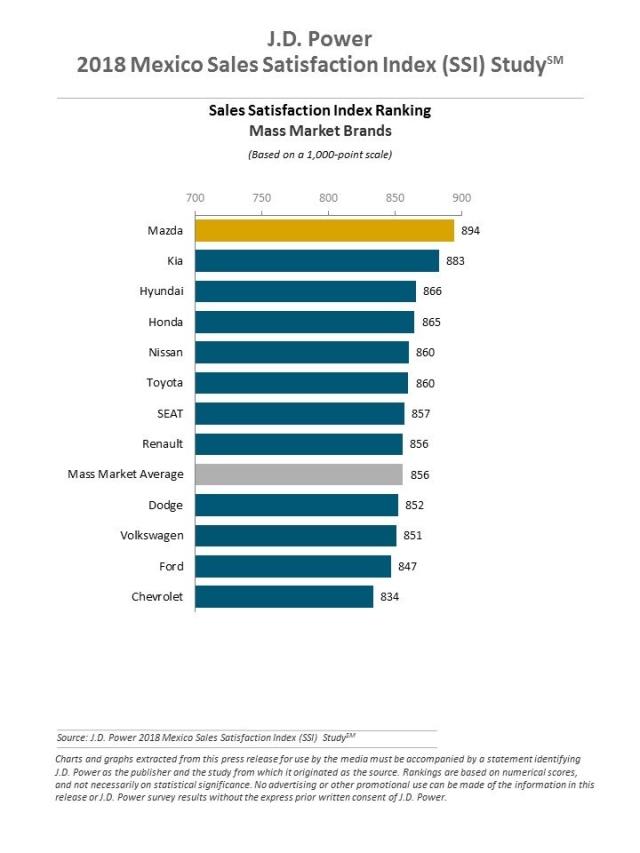 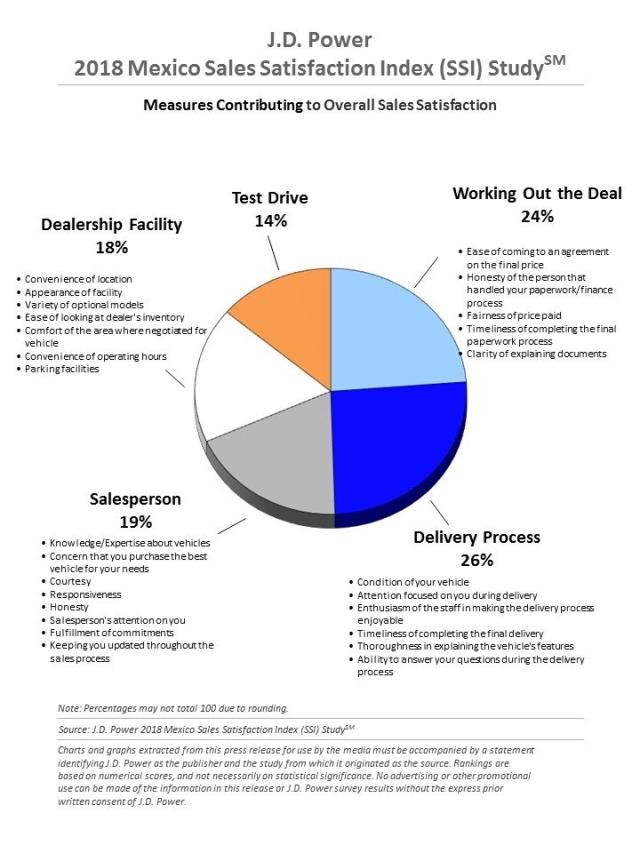